This paper presents  a “new index of the year when the projected mean climate of a given location moves to a state continuously outside the bounds of historical variability under alternative greenhouse gas emissions scenarios. Using 1860 to 2005 as the historical period.”  Here is a NYT quote from the lead scientist on the paper, Carmilo Mora, that probably sums it up best: "To put it another way, for a given geographic area, 'the coldest year in the future will be warmer than the hottest year in the past.” Or I also saw it referenced this way in a recent MNN Post article: "Climate departure" refers to a kind of tipping point at which the up-and-down fluctuations of annual temperature averages climb into a zone completely and permanently outside a "normal" range established in a record going back to 1860.” 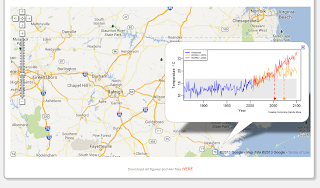 The authors of the Nature article released a map showing The Year of Climate Departure for World Cities. This map displays data from one out of the 39 models used under two different CO2 emissions scenarios (RCP4.5 (rapid mitigation) and RCP8.5 ("business as usual"). According to their climate models, the year of climate departure (under a "business as usual" scenario) for New Bern, NC is 2053!

Furthermore, the authors cite that “unprecedented climates will occur earliest in the tropics and among low-income countries, highlighting the vulnerability of global biodiversity and the limited governmental capacity to respond to the impacts of climate change.”  See also The Year of Climate Departure for Biodiversity Hotspots.

For more information check out:


Cold Years in the Future Could Be Hotter Than the Hottest Years Now
Time Magazine, Oct 10, 2013