In January 2014, NASA released a report on 2013 global surface temperatures revealing that "the average  temperature in 2013 was 58.3 degrees Fahrenheit (14.6 degrees Celsius), which is 1.1 °F (0.6 °C) warmer than the mid-20th century baseline" and tied with 2006 and 2009 for the seventh warmest year since 1880. Accompanying graphics and an animation of  global temperatures from 1950 through the end of 2013 are also available along with a written summary of the results (pdf) by Dr. James Hansen. This summary also contains graphics and visualizations that can be useful in the classroom. Furthermore, you can generate a surface temperature anomaly or trend map using the following tool and the resulting map can be downloaded as a pdf - the map below is one I created showing December 2013 temperature anomalies relative to 1951-1980 base period. The visualization reveals that this month brought exceptionally cooler temperatures in North America and warmer than average temperatures to northeast Europe and Siberia.

Another tool that might be useful when discussing temperature trends up through 2012 is a new Google Earth/Google Maps tool that shows how land surface temperature has changed since as far back as 1850 for some regions. The University of East Anglia's Climatic Research Unit divided Earth's land surfaces into equally sized grid cells and calculated the average annual temperature for each cell using temperature data acquired from monitoring equipment. You'll notice that the cells appear either red or green but these colors are not indicative of a particular trend. In order to view the annual (and seasonal) surface temperature trend (an corresponding data) for a particular cell, simply click on that cell and a graphic will appear that shows the temperature anomaly from the 1961-1990 mean. Below is the graphic for the cell that includes the area of North Carolina in which I live. To learn more about this tool click here. You could use this tool with students to examine seasonal trends for a region, to examine different regions of the globe and to emphasize that there are places on the globe where there is not adequate data for trend analysis due to short temperature records and/or lack of monitoring stations. 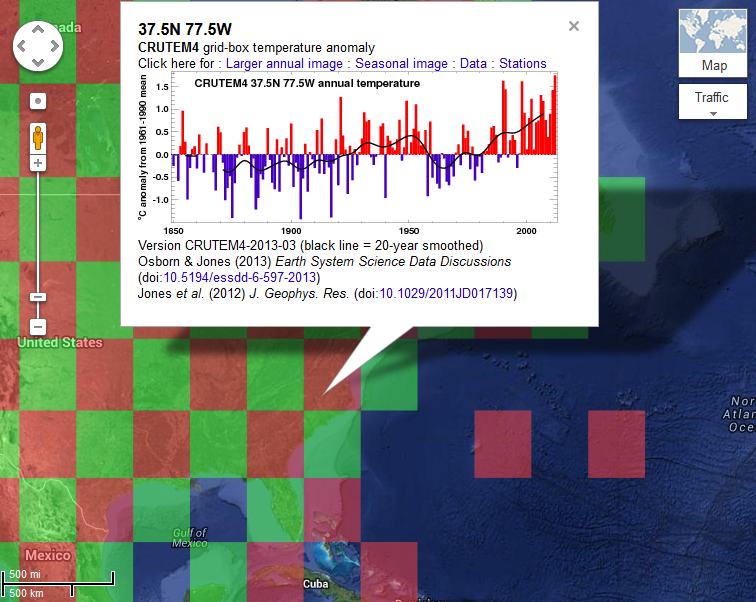